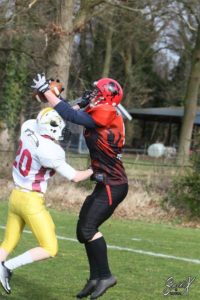 How did you get introduced to football?

Watched it for a couple of years on ESPN America. Then saw the Broncos practicing on the Vogido Soccer Fields. When a good friend of mine started practicing with the Broncos, I decided to try it out for myself. That was when I was thirteen and have been playing ever since!

Tell us your best football memory

My favorite personal football memory is playing against the Milano Seamen. During my minor abroad in Budapest, I started playing with the local team, The Wolves. After couple months of practicing hard and playing some games as a back-up, I became a starter as cornerback. A couple weeks after that we had an away game planned against The Milano Seamen. The Bus drive there took 16 hours and we had to leave on Friday instead of your regular Sunday departure. When we arrived at the field we found out it was going to be played inside an old Roman stadium, which made it even more special. The game itself wasn’t great for our side. We lost by many touchdowns. However, the highlight came in the 4th quarter. With a massive downpour coming down, passing had become impossible. When the opposing offense was on our 10 yard line, they fumbled. Our DE pick it up and ran it back for about 90 yards. This was our only score that game, but we celebrated it like it was a game-winner!

What is your job / study?

What do you like to do in your spare time?

Play sports and go out into town

Is there anything you want to add by yourself?